There is so much fascinating history and extraordinary geography to this wonderful country as well as the unique culture. If you want to extend your holiday, why not fly out a few days early and spend some time exploring?

Meteora, comes from the Greek verb meteorizo meaning ‘to suspend in the air’, which describes exactly what is seen at Meteora. These rock formations that project dramatically into the sky, resembling natural towers, once supported 24 monasteries. These monasteries, stunningly built atop steep sandstone peaks (the monks used rope ladders and nets to ascend and descend) are in themselves one of the most breathtaking sites in the world and were built by the monastic community that established themselves in the area around the 11th century A.D. Today, only 6 out of the 22 monasteries are inhabited and accept visitors.

According to geologists, the rocks were created millions of years ago by the Pineios River as it split the huge north-south Pindus range to the west from the Thessalian plain, and thus separated the Pindus from the eastern range that includes Mount Olympus and Mount Ossa. These grey pinnacles sit in the northwest corner of the huge plain, just north of the town of Kalambaka.

The Gorge of Vikos is not only the largest in the world according to the Guinness Book of World Records, it is also home to over 1000 different plant species and is the world’s deepest canyon in proportion to its width.

There are plenty of mountain tavernas and hostelries to stay at. Contact Phil for some recommendations. 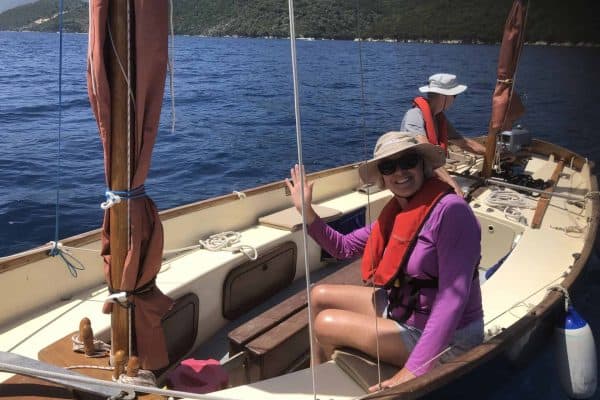 We have just returned from the most wonderful holiday, sailing a beautiful Drascombe Lugger, called Paxi, in Lefkada. Our expectations of the sailing trip were far exceeded, and we will always remember it. But first, how did two Aussies end up sailing a Drascombe Lugger in Lefkada, Greece in June 2019? Well, it all started…